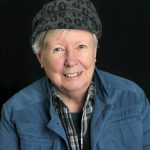 Judy Grahn is internationally known as a poet, writer, and cultural theorist.

Grahn has published thirteen books with several more in process; publications include two book length poems, several poetry collections, The Judy Grahn Reader from Aunt Lute Press, an ecotopian novel, and five non-fiction books. Among them are Another Mother Tongue: Gay Words, Gay Worlds; Blood, Bread, and Roses: How Menstruation Created the World; and her memoir, A Simple Revolution: the Making of an Activist Poet. A collection of nine-part poems, Hanging On Our Own Bones, is her latest, from Red Hen Press.

She lives in California with her wife.