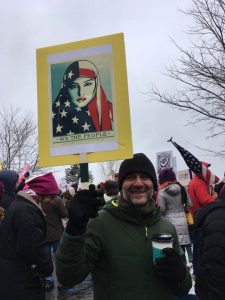 Recent events have challenged us in many ways, and responses to these challenges have varied hugely.  From grassroots demonstrations in support of immigrants and refugees to increasing pressure on political representatives, from buying guns and stocking supplies to renewing passports in preparation for flight, Americans have shown growing displeasure with the current political scene and have sought to regain some sense of balance, some peace of mind.  The most fascinating response, however, has been a burst of creative expression unparalleled since the 1960s and early 1970s, when opposition to America’s involvement in Vietnam reached its peak.

This creative groundswell has inspired events such as the Women’s March with its pink pussy hats, the unprecedented turnout in support of Native Americans at Standing Rock, the deluge of passionate posters flooding every demonstration, and cartoonists’ and late night show hosts’ jubilant mockery of the Trump administration.

Rather than sinking into a sea of depression and despair, liberal America seems to have bounced back from the shock of last fall’s election and its fallout with cheeky humor and sharper wit.  What’s behind this feisty behavior?  Have we lost our moral compass?  Have we lost our collective mind?

The answer is really very simple.  Art as activism is healing.  It restores our sense of efficacy, our feeling of personal power.  It offers a fairly safe and effective outlet for our most intense emotions, and even when we know we’re mostly speaking to the choir, we also sense that on some level our opponents are getting the message.

The Fall issue of Four Winds Journal and the Webinar that follows on November 11 address the phenomenon of art as activism:  motivation, development over time, who participates, and how it can heal individuals and communities.  We believe this will give you a fresh and hopeful perspective on these “interesting times.”