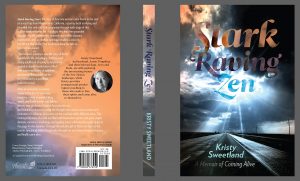 Many years ago I experienced what Stanislaus Grof calls a “spiritual emergency,” and after intensive research discovered that the profoundly disturbing and potentially lethal physical, emotional, and mental anomalies that occurred during this process matched the description of a “spontaneous shamanic initiation.”

Spontaneous shamanic initiation is the theme of Kristy Sweetland’s riveting account of a life-changing road trip, from her home in Minnesota to southern New Mexico and back, in company with her beloved dog, Arya.

While she was fortunately able to avoid having a severe accident or contracting a life-threatening disease, Kristy’s experience was no less a shock to her sanity and her world view, for the combined effects of her spiritual guides’ efforts to protect and enlighten her, along with the many attempts of much darker forces to destroy her, literally unhinged her mind (hence the title of the book).

When reality ceases to be real and the surreal takes over, there is nothing to do but place one foot in front of the other and take each moment as it comes.  One aspect of shamanism is the belief that whatever happens in the moment is your reality.  Whether you’re walking around your neighborhood, chatting with friends at a coffee shop, having a terrifying nightmare, or traveling back in memory to childhood during meditation, what you’re experiencing at the time is real for you.  Imagine, though, what it would be like to be conversing with an angel one moment and fighting off a horde of the undead the next—all within the space of 15 minutes. These are the kinds of trials that happened to Kristy, and kept happening for the better part of a month.

“Trials” is the operative word here, because through various tests and trials, the training of a true shaman demands a complete breakdown of the ego-driven familiar self and  reconstruction from scratch into who we are meant to be, in order to do whatever we agreed to do between lives.  Integration of the training and acceptance of the new state of being may happen quickly or take months, even years.  This process, whatever form it takes, is called “shamanic initiation,” and when it happens with no warning as it did for Kristy, it becomes a “spontaneous shamanic initiation.”

There is a light at the end of this perilous tunnel, however. The reader is relieved to find that through the trials to which she is subjected, Kristy discovers the strength of her true nature.  She is able to come to terms with the dysfunction of some of her family members. She learns of a past life as the beloved of Mangas Coloradas, a famous though much maligned Apache leader in the 1800s (which explains a great deal about her physical and emotional sensitivity in this lifetime).  She discovers her path as an advocate for Earth, and finally, she recognizes that she is always held and guided by Spirit, whatever form it may take.

Regardless of one’s belief in the supernatural or lack thereof, Stark Raving Zen is a real page-turner.  Readers will travel every step of this journey with Kristy—thrilled by the fearsome beauty of the Southwestern landscape, comforted by the calm presence of her angel dog Arya, hearts beating double-time in anticipation of whatever new challenge will present itself, just around the next curve in the road.