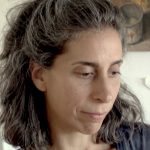 Robin Wiener Labe holds a BA in sociology from the University of Pennsylvania.  After graduating, she spent the next ten years exploring the world and getting to know herself better while employed at a variety of jobs ranging from working in a bookstore to selling pottery from a pushcart in downtown Boston. At age twenty-nine, she decided to apply to art school and has been practicing art-making ever since.  In 1997 she graduated from the Pennsylvania Academy of the Fine Arts in Philadelphia.  She and her sculptor husband, Adam Labe, then moved to southern New Mexico where they both received Master of Fine Arts degrees from New Mexico State University.  She has taught painting and drawing as an adjunct professor at NMSU, and has also worked with young children in an arts-based preschool in Wisconsin.

Much of Robin’s artwork stems from close observation of the natural world, as well as of human and non-human faces, with themes of loss, grief and regeneration recurring in many of her pieces.   Most recently she has been working with clay and is excited by what she has yet to explore and discover.  She currently lives in Las Cruces, New Mexico, sharing a home with her husband, daughter, two dogs and a turtle.