This page will be updated as the future unfolds.  Its purpose is to keep readers of Four Winds Journal and visitors to Orenda Healing International’s website and social media pages informed on local, national, and global events, and to update them on various “citizens’ responses” to these events.

President Barack Obama’s farewell speech  reminds us that as global citizens, we have a responsibility to keep abreast of the actions of our political leaders, to act honorably, and to urge them to act in the best and highest interests of humans, non-human others, and the planet itself.

As those who fought for women’s rights stated over 40 years ago:  The personal is political.

Never Mind What He Says– Watch His Feet!

Who Told Flynn to Call Russia?

Bring Back Jobs?  Not!

Can He Be Impeached?

Call your representatives in Congress and insist on an external investigation of Trump’s ties to Russia.

Contact your representatives in Congress and let them know you will not stand for the building of concentration camps in this country.

Trump’s Wall:  Contact your Senators and Representatives and tell them to oppose the wall. 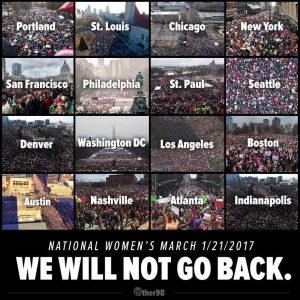