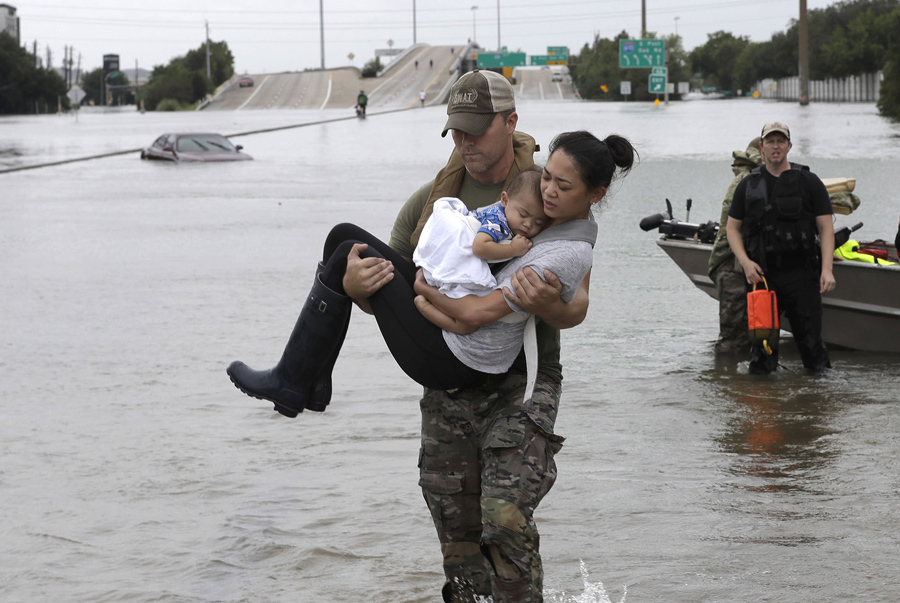 Houston Police SWAT officer Daryl Hudeck carries Connie Pham and her 13-month-old son Aiden after rescuing them from their home surrounded by floodwaters from Tropical Storm Harvey on August 27, 2017, in Houston, Texas. #

First-hand Account-From a Citizen of Houston, via Dana, shared by Lumina Greenway, one of OHI’s Board Members.
Dearest Out of town peeps,
I’m going to try and explain what we are seeing here. Words are not expansive enough to put into a mental picture. I’m not going to worry about grammar, etc.
FIRST: The Scope
Start in Galveston head north up Interstate 45. Every county to the East to Beaumont and to the West to a small town called Columbus is underwater. About 100 miles in any direction. Keep moving north past NASA and once again every neighborhood Is underwater. If you get a Houston area map and have your eyes move horizontally–Move 100 miles to the the east and west….every piece of land, every subdivision, every business, every school is underwater. Now there are some that are not totally under, but I would say maybe 20% still have a semblance of dryness. ( I’m one of 20%) for now. Keep moving. Up to Pearland, Dickinson, Baytown and remember to move your eyes left and right 100 miles each way. Keep going north to Loop 610 pass Astrodome and NRG home of the Texans. A giant lake as far as the eye can see. the famous medical center is underwater. Keep moving to Interstate 10. Most is totally underwater with the depths reaching the bottom of the cross overs. The side roads are gone. Imagine the MILLIONS OF PEOPLE living along your path in every type of housing known to man. The water is reaching second and third story balconies of homes and apartments. As you move North still heading North I10 to San Antonio and Beaumont is under water. Get to Fm 1960 and I-45 and the road is GONE. Once again let your mind imagine the hundreds of thousands in neighborhoods etc tucked in..stranded…scared.
Go to the Woodlands/ Conroe…under freakin water!!! It’s this way all the way to  Huntsville Texas. All the way to Columbus Texas past Katy. Under water. All the way to Anahuac Tx. Under water.
SECOND: Human Scope. This thing is no respecter of wealth. It becomes a matter of resources. There are garbage bags to name brand luggage. What is common is a sense of frantic…being pulled out of high end homes or mobile homes with the clothes on your back, your kids, and the pets…then being taken to a shelter…somewhere. Your family in the area might as well be in Europe. The “ocean” is that expansive. New borns, children with their little backpacks, if they’re lucky. The look on their parents faces. And you should see the helicopter rescues of people dangling in the sky or in the basket with children and their pets. Old, disabled…it’s a wave of humanity that does not stop. Regardless of their circumstances they all say in Spanish, Vietnamese, and many other dialects “We’ve lost everything.”
The shelters are filling up. The school districts are opening up their high schools. Do you know how huge Texas high schools are? Filling up as soon as they open up. Great Houston private businesses are giving their big trucks loading up people, depositing them under bridges. This is a DUNKIRK of massive numbers.
One of the richest men in Houston, Mattress Mack of Gallery Furniture opened two of his huge furniture stores as shelter. He gave out his personal cell phone. Providing food, security and welcoming their pets. Another major furniture guy Hilton furniture, is providing his trucks to move people. The grocery stores Not under water are trying to open but have no workers. They’re letting five people in at a time until they run out of food. And there is the amazing HEB! I will never shop at another store.
Calls are going out for supplies for shelters…no one can get there! We are talking MILLIONS of people.
THIRD: The infrastructure of disaster. I’m just going to make a list for you to think about: Moving people from point A to B. Hundreds of thousands of cars are destroyed.
Public services, like buses, cannot move.
Public safety vehicles cannot move where they are needed
Hospitals are under water…emergency centers, care clinics are under or closed– all hospital staff are in the mess of this.
Shelters need EVERYTHING. The Red Cross is doing what it can. ONCE AGAIN…it’s the huge scope of
Humanity.
Law and order. It will get worse.
Trying to coordinate Texas’ very decentralized local and state jurisdictions. Very complicated which can
Lead to confusion and mixed messages. The county judges are doing fantastic Work as they are
The primary lead for counties. The Governor stepped up with the National Guard call out. But
Putting “boots on the ground” takes time. People must not criticize the Coast Guard for
Not flying at night in the rain. There is a chain of command…there are safety protocols to protect
The pilots and crews.
AND all local police/first responders have to navigate the flooded highways…some cannot make it. PEOPLE INCLUDING THE TV STATIONS NEED TO BE QUIET about this.
I believe FEMA is responding as well as expected.
FOURTH: Houston is NOT the only disaster area. CORPUS,
ROCKPORT, PALACIOS…destroyed. That’s about 200 miles south of Houston. Resources are limited for immediate response. I’m worried that in a few days people’s frustrations will boil over…I hope not. Desperation breeds anger and violence.
Last: As I watch what is happening, I’m overwhelmed with the lack of the rhetoric we’ve witnessed in Charlottesville, Arizona, blogs, etc. If you can, stream a Houston tv channel. Every color, race, ethnicity, religion is involved in the rescues.
See a large rough looking man of any background lift a frail Asian, Hispanic, African-American elderly adult…cradling a small child as they take them off boats…they are not asking for legal papers…they are humans being humans practicing God’s Grace……..
God Bless ALL in Houston and surrounding areas. 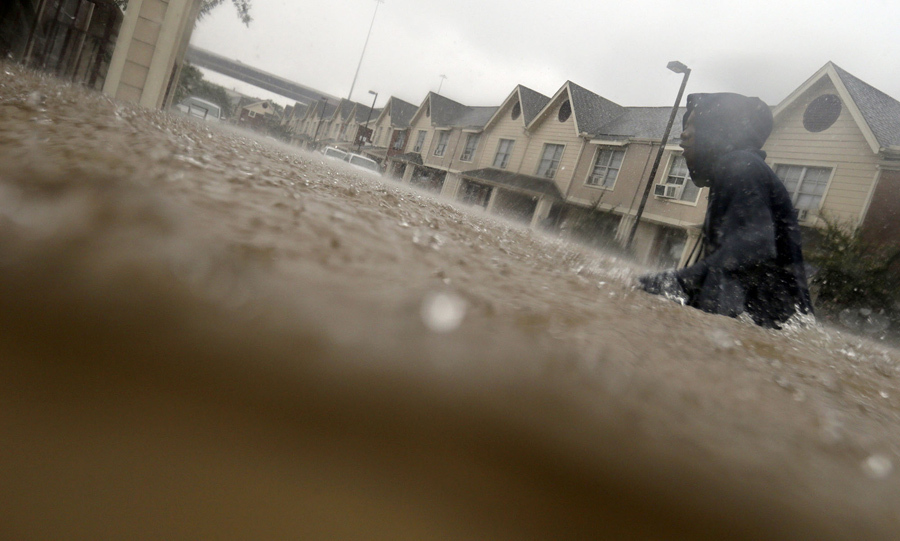 A child makes his way through floodwaters from Tropical Storm Harvey while checking on neighbors at his apartment complex in Houston on August 27, 2017. #

Additional photos are included in Alan Taylor’s article for The Atlantic, August 28, 2017, and may be viewed here.

IF YOU WANT TO HELP: