This topic is temporarily postponed.

Acting Out:  Kids Who Are Changing the World 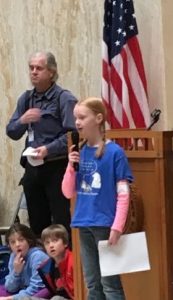 The older generation passes the baton to the younger one— in most societies this is what usually happens.  Elders, after all, are supposed to have gained considerable wisdom from their life experiences, and the plan is to protect the young from doing foolish things and getting hurt.Except this time it’s the other way around.  Young people from middle schoolers to millennials are redefining “wisdom,” and they are now holding the baton.  Frightened and angered by the mess adults have made of their world, teens, tweens, and young adults are addressing major life-threatening issues with a no-holds-barred fervor and commitment to forcing change.  Some of them are already well-known:  Swedish teen Greta Thunberg, whose “Fridays for Future” climate change sit-ins have gone viral, inspiring youth in many countries to follow suit, and earned her not only Times Magazine’s 1919 Person of the Year rating but also a potential nomination for the Nobel Peace Prize; the Parkland Five and their national teams of high schoolers, whose fight for gun control continues unabated; the Oglala Sioux Water Protectors and their young native and non-native supporters from around the world, who held off the Dakota Access Pipeline at Standing Rock for months.

These are among the headliners—whose slow but sure progress derives not only from their passion but also from individual and collective acts of courage in the face of certain and frequently violent opposition.

Now however, Four Winds Journal wants to showcase the less publicized but equally vital work of young people in our own communities—like the 8th grader from Albuquerque  (shown here) who had her school charter a bus to bring fellow students to Santa Fe for a Fridays for Future sit-in at the State Capitol.  Or Adam Avin, the 16-year-old high school student who learned mindfulness meditation at the age of 9 and has since created two nonprofits—Wuf Shanti and the Kids’ Association for Mindfulness in Education—through which he teaches mindfulness meditation to other youth ages 4-17, resulting in better grades, increased impulse control, calmer teachers and parents, and happier kids.

We’re inviting teens, tweens, and young adults to submit relevant articles, poetry, or photos of artwork for our Spring/Summer 2020 issue, Acting Out:  Kids Who Are Changing the World.

Please follow the embedded blue link to read the instructions on our Submissions Guidelines page before sending your submission.  If you have any questions please email or call us, and send your submission via email attachment to:
Editors –  Four Winds Journal
journal@orenda-arts.org
505-780-5990