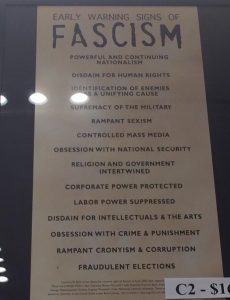 Readers be warned:  this is a political blog entry!

There are so many arguments about how and when to address the monumental political changes that are occurring in America today that people are confused– overcome by a combination of righteous indignation, resentment, outright anger, and fear.  It’s this last emotion I want to address here.

The time to speak up about how you feel is now.  There will never be a better time.  Unspoken, these turbulent emotions only serve to make us even more angry and fearful and often affect our health as well.   Friends, family members, and clients have complained about how sick they’ve felt since the presidential inauguration and the resulting avalanche of comments and activities flooding the  media, Twitterverse, and Facebook.

Despite knowing this, many have resigned themselves to suffer in silence.  Reasons vary.  Some are afraid to arouse the Beast.  Some simply hope that if they don’t energize it, all the bad stuff will quietly disappear.  For others, one fascinating justification is the belief that our speech and actions create what we will experience.  Whether this is true or not, acknowledging and “outing” an unacceptable situation does not automatically predispose the Universe to deliver a negative result.  Yet people insist: “Talk about what you want.  Not about what you don’t want.”

My response to this advice is that if you have a serious disease and refuse to acknowledge and address it, it may kill you.  Knowledge is power.  Shared knowledge energizes right action.  So speak up!

The other point that needs to be addressed is what to say.  For many months now, people have tiptoed around the serious issues that confront us– more blatantly and alarmingly every day.  “Don’t call him names,” I hear, and “Don’t say he’s crazy.”  “Don’t use the word resistance because it just aggravates the opposition.”  “Maybe there’s nothing to this Russian thing.”  “Maybe it’s just a performance– like reality TV.”  “Maybe the Republicans will move him out on their own.”  And since last night’s address to a joint session of Congress, “See?  He’s softening up!”

Our country’s new president has spent the entire past year and his first month in office spewing venom and vindictive comments about Latinos, women, Muslims, Blacks, refugees of all ages, and members of our own military.  He has vowed to undo every piece of positive legislation passed since the 1970s, to undermine any attempt at social justice, and to roll America back to the 50s and earlier, when the only citizens who enjoyed any sort of privilege were wealthy white men.   Ignoring the clear evidence of climate change and the existence of far more efficient and planet-friendly energy sources, he has promised the impossible:  to return us to an economy based upon inefficient technologies– steel mills,  coal mines, and fossil fuels– despite the fact that the collateral damage includes not only unnecessary world-wide wars for the purpose of seizing other countries’ fossil fuels, but the total destruction of the planet itself.  He has threatened to silence the media because he cannot stand criticism.  And he has blamed all his mistakes so far (which are many) on others:  his staff, his political party, former President Barack Obama, and the American people.

Is this what we want to be?  A global bully, despised by the rest of the world?  A totalitarian state run by an amoral dictator and his cartel of unprincipled supporters?  The leaders of other nations– Mexico, Canada, England, France, and many more– are begging us:  AMERICA, WAKE UP!

But do speak up.  And speak up now.