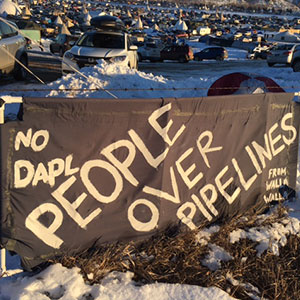 Copied and pasted in FB by request:

Cruel, heartless behavior and, the sad truth is, we don’t even need the oil.
From Zen Honeycutt’s page. Please share.

With a very heavy heart:
Harrowing news out of Standing Rock from volunteer, Deborah MacKay.  Warning: It’s not pleasant. But you need to know this, and share.

Friends, I have returned from Standing Rock with my mind blown, my heart broken and my spirit troubled with foreboding of a deepening tragedy. Volunteering as a legal observer with the Water Protector Legal Collective I witnessed several confrontations between Water Protectors (WP) and law enforcement: national guard, sheriffs and private security (LE).

On 1/18/17 – 1/19/17 I observed WP with their hands in the air chanting “hands up don’t shoot” being fired upon at a range of 10 to 15 feet. Tear gas canisters and rubber bullets ( rubber bullets are regular bullets covered in rubber) were used against unarmed WP who had been singing and praying. I observed national guard chasing WP off the Backwater bridge, firing at people running away. I heard people choking and gagging from tear gas. I saw access to the WP medic vehicles being blocked. I spoke with medics and WP who described bullets penetrating flesh and causing terrible injuries, including to one media person who nearly lost his finger when his camera was targeted.

I talked with a media person and was told of 4 media people on the bridge that night, 3 had their recording devices shot and the 4th, his hand. I saw a photo of a sheriff aiming a rifle directly at a media woman who was standing apart from the crowd. I heard testimony of the back of the medic pickup truck being awash in blood after evacuating wounded.

I watched, and then, inadvertently became a part of, WP being forced off the bridge by national guard who were hiding behind WP vehicles parked along the road and firing rubber bullets at fleeing people. Many people were shot in the back, the neck, the head. When LE fired at people at close range, many were shot in the genitals or in the face. I received information about DAPL security breaching the short wave radio channels of the WP with taunts such as ”come out and fight like men you faggots or we will come to Camp and fuck your women.”

There are some young warriors, who, without the support of their elders, many who want the camps cleared to mitigate the economic and social damage being suffered by the local community in having the bridge closed, have vowed to not leave the camps or to let the last section of pipeline be built.

Without the eyes of a free press these attacks and trespasses continue, with the human rights and sovereignty of indigenous peoples denied. The UN Committee on Transnational Corporations and Human Right Abuses was in Standing Rock this week to take testimony of the many transgressions against people: crop dusters spraying poison pesticides and fertilizers on the camps; hair samples indicating the presence of these chemicals; people who have been injured, beat up, arrested, strip searched; media and medics being targeted by snipers; (one medic told me he stopped wearing his Red Cross vest due to medics being targeted); praying people being attacked and the refusal of DAPL and our government to abide by the Rule of Law.

The vets who came in Dec to stand down against these crimes need to be on the ground there now, right now. We need to stand up for our brothers and our sisters, for their way of life and, I believe, for our social contract as a democracy which is now threatened.

Please share this so word gets out what is happening, thank you.
Deborah MacKay

This is copy-pasted. If you choose to share, please do the same.